In June 2015, Rosch Innovations Deutschland GmbH invited the Mexican KPP licensees to attend talks. The planned scope of the project was determined in several consultations and a cooperation between Rosch and HTL GmbH was agreed upon, for the entire project development phase, the development of the concept (feasibility study) and the project management, until first operation of the 5MW power generation unit.

The challenge was to obtain the necessary approval, due to the challenges posed by local conditions and adherance to all the general, country-specific project requirements. In order to achieve this, numerous documents and special technical information had to be drawn up. The local authorities and the companies from the energy sector that serviced the area, CFE and CENACE, needed to be convinced. HTL drew up the appropriate project documentation for the initial coordination talks.

In coordination with CFE and CENACE, the Mexican licencees evaluated three potential building sites for the installation of the kinetic power plant.

In September 2015, HTL was commissioned to perform the feasibility study. They visited the project development area in Mexico (Los Cabos) for one week, in order to prepare for the realisation of the 5 MW kinetic power plant (KPP®).

Within the framework of the project preparation, the building site had to be chosen in agreement with the local companies. Furthermore, much emphasis was placed on the planning of the integration of the 5 MW power plant. The GPS coordinates for the test drilling sites were specified, followed by rough planning of the project schedule.

Communication structures were coordinated with CENACE / CFE and connection requirements were defined.

In close coordination with the local authorities (CFE, CENACE) and the Mexican licensees, detailed technical analyses were performed. After checking the local distribution grid infrastructure and the assessment of various substations and the existing power stations, a suitable site was found.

The results of the analyses were very positive and the required solutions for the integration of the kinetic power plant (KPP®) into the local system technology were dealt with within the framework of a project.

HTL was able to clear up all the required details for the electrical integration of the KPP® into the existing switching stations with the local energy supply companies and the responsible supervising authorities.

The building site was surveyed and test drilling was done according to HTL’s specifications. The authorisation process based on the documentation (feasibility study) was initiated. In addition to the feasibility study, further environmental studies and the building application also had to be submitted.

In June 2016,all the official authorisation – which represented the biggest hurdle faced by the project – was issued. Currently, the detailed planning of the building project and the determination of the logistics are underway. 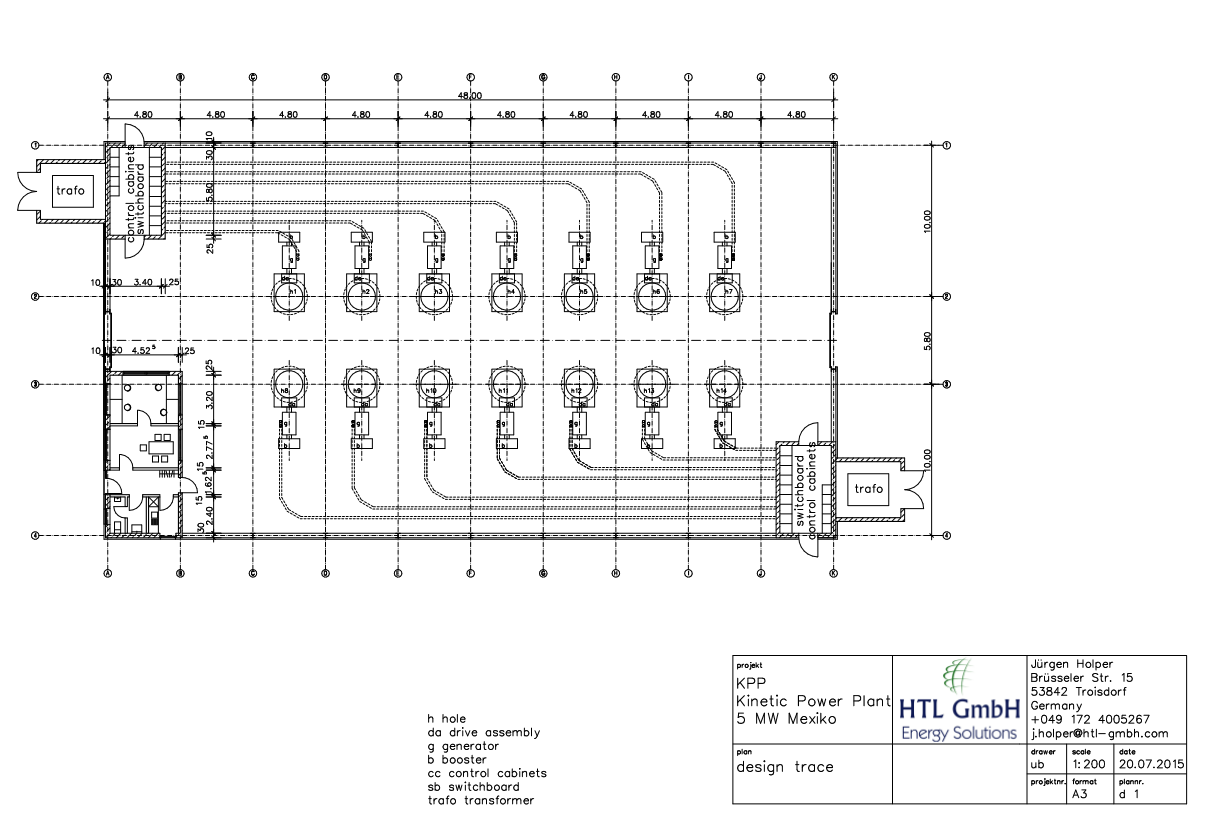 Do you have any questions?
Discuss your plans with us!